About Yin and Yang

The concept of Yin and Yang is a tool for achieving optimal balance in thought and action by understanding the range of extremes of any quality. This concept pervades Chinese philosophy, language, and medicine.

Examples of complementary pairs of some familiar qualities are given in the table below. The reader might also examine the synopsis of categories at the beginning of a Roget’s Thesaurus, which organizes complementary aspects of every imaginable quality. Then it would be useful to determine which of those aspects are yin and which are yang.

Viewing things in terms of yin and yang might seem to be a gross oversimplification. In fact, it is not. The Westerner is highly accustomed to precision and may fail to realize that these categories are only the surface of a profound conceptual framework. The concept of T’ai Chi seems simple but actually takes much time to comprehend. There is a yin-yang range of each action we take in any situation. Each action must have the right proportion of yin and yang to be in harmony with nature. An understanding of yin and yang helps us to put these aspects in balance. This balance is represented by the T’ai-Chi symbol (below).

Fig. 1. The T’ai-Chi Symbol, which portrays the balance of yin and yang and their cyclic evolution. The dark part is yin and the light part is yang.

Since the black part of the T’ai-Chi symbol (when printed) is the presence of something tangible, namely ink, it might seem that it should be yang. Similarly, the white part is the absence of anything and would seem to be yin. Instead, the black and white regions symbolize darkness and light, respectively. Light is substantial and darkness is the absence of anything and, therefore, insubstantial. Thus, the black part represents yin, and the white part represents yang .

Here are three additional versions of the T’ai-Chi symbol:

In Fig. 2, the top, clockwise T’ai-Chi symbol (labeled right-side up) with yin (dark) at the bottom is a correct variation and is preferred by some. However, the two lower T’ai-Chi symbols (labeled upside-down) have yin (dark) at the top and yang (light) at the bottom. But down is yin and up is yang. Both of these latter symbols portray a yin/yang inconsistency and are, therefore, incorrect.

Note that the T’ai-Chi symbol portrays yin and yang as continuously evolving from one to another, as night into day. When yang becomes full, it starts to become yin, and vice versa. If an action is too strong, it will produce weakness. Conversely, yielding to a strong attack results in a stronger position. Moreover, since nothing is completely yin or completely yang, the fullest yin part contains a small circular region of yang, and vice versa.

Nothing in the world is softer and more supple than water, Yet when attacking the hard and the strong, nothing can surpass it. The supple overcomes the hard. The soft overcomes the strong.
—Lao Tzu

If the opponent attempts to attack you by using a lot of force (yang) and you use force (yang) to repel the attack, the opponent will increase his force. Then you must increase yours. Each person’s force escalates, and eventually the strongest wins.

But what if you are old, sick, injured, or under the ill effects of a pharmaceutical? Then you probably won’t be stronger than your opponent. By not using force (yin), you can neutralize the attack and cause the opponent to be weakened (yin overcomes yang). Then you can use as much force as necessary. T’ai-Chi Ch’uan (Ch’uan means fist) is a system of self-defense based on such a use of yin and yang, but learning it in that modality is not easy.

Note that neither yin nor yang can be characterized as good or bad. We tend to think of standing firm as good and yielding as bad. This misconception results from a lack of harmony with nature and from taking a simple-minded approach. Nature is neutral, and its range cannot be simplified in terms of good and bad.

An obvious feature of the T’ai Chi symbol is its perfect continuity of change. There are no sharp corners—only uniformly changing circular shapes. This continuity implies that we must not allow any gaps in our awareness nor any impulsiveness in our actions. Restraint, self-discipline, and awareness of natural cycles are required for eventual appropriate and natural action. Discontinuity means a gap in awareness, which puts you in the past and alerts the opponent, giving him an advantage.

In defending against an attack, circular motion has advantages over straight-line motion. Circular motion has a centrifugal effect; namely, the attacker is automatically propelled away from the center of rotation and, in order to keep his balance, must continually adjust. Doing so is even harder when the rotation is three-dimensional, in which case the center of motion is constantly changing and hard to predict.

Dots of Each Opposite Polarity

Notice that in Fig. 1 (above) the yin region contains a dot of yang and vice versa. The original T’ai-Chi symbol had no dots. The current South Korean flag (see Fig. 3) has the earlier type of symbol, without the dots. The dots have several interpretations. In one interpretation, the dot of each quality in its complementary opposite implies that it is unnatural for anything to be completely yin or completely yang. In another interpretation, each dot represents the beginning of the opposite polarity at each extreme of yin or yang. 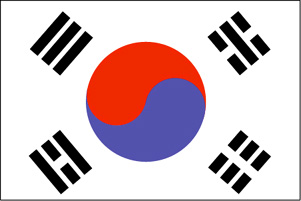 Fig. 3. The current South Korean Flag (from http://www.worldatlas.com/webimage/flags/countrys/asia/skorea.htm), which was officially adopted in 1949. Note the absence of the dot of yin in the yang and vice versa. Older versions of this flag have even earlier depictions of T’ai Chi.

(1) Years ago, I had a friend who spent a lot of time building up his muscles. He was very big and strong (yang). He would lift weights whether or not it hurt, sore muscles or not. At one point, he told me that he had done so much damage to his spine that he could not lift weights any more (yin) and even had difficulty in using a household vacuum cleaner.

(2) Every day, on my way to work, I pass an intersection with a stop sign. Recently an unusually high speed bump was added, ostensibly to slow down traffic in the area. Even when cars go over the bump very slowly, they bounce as if driving over a curb. The result is that some drivers began to avoid the bump by going around it. Now, many cars do not even bother to stop but simply cross over to the other side of the street and go through at full speed. Because it is too large, the speed bump actually increases the speed of traffic and creates a more dangerous condition than if it were absent.

(3) When antibiotics were first employed, they were termed “miracle drugs” because they had such a dramatic antibacterial effect. But antibiotics were used indiscriminately, which, according to the United Nations World Health Organization, has created a world-wide health crisis. Many bacteria are now resistant to antibiotics, and a whole class of new diseases have arisen, which a frivolous use of antibiotics may well have caused. The cycle of yin and yang can be thought to have been in operation here.


Yin and Yang in T’ai-Chi Stepping (See 5-minute video below).