The food pyramid is designed to represent the relative amounts of each type of food to consume daily for optimum nutrition. Actually, the relative amounts are more representative of the degree of congressional influence by the powerful manufacturers of each type of food. The agriculture industry, which primarily produces wheat, has had the greatest influence—the entire base of the pyramid is devoted to breads, rolls, rice, crackers, cereals, and pasta.

If you look closely at the base of the pyramid, you will have the option of using your imagination in determining whether the grains, flours, breads, pastas, and bakery items represented are made from whole-wheat. However, once you are in the supermarket, just try to find these items in whole-grain form. If you find any whole-wheat pasta—which is highly unlikely—it will most probably have an unpleasant, rancid taste. That is why the flour is refined, namely, to remove the most nutritive part, which can quickly become rancid or attract insects and vermin.

The reader may be interested in Consumer Reports’ comments† concerning the USDA’s conflict between protecting the public health and promoting the interests of the food and medical industries. The reported interference by the American Medical Association to the adoption of governmental dietary goals is particularly distressing.

Let us consider the relative amounts of each “food group” suggested by the food pyramid: 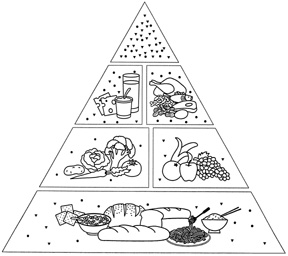 Assume that the food pyramid is two-dimensional (that’s the triangular view that we see) (Fig. 1). Then we can assume that the area of each food group is proportional to the relative amount that is suggested to be consumed in the American diet. Consider the pyramid shown below (Fig. 2). Triangles identical to that of the top level have been drawn so that the relative area of each of the four levels can be found by counting the triangles in that level.

Fig. 2. An isosceles triangle, broken down to show the relative area of each of four levels corresponding to that of the food pyramid.

Note that the two categories of junk food and pasta, bread, crackers, and rice comprise 50% of the suggested American diet! 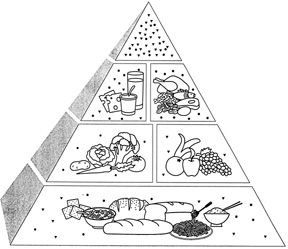 Note that that the two categories of junk food and pasta, bread, crackers, and rice now comprise a whopping 58% of the suggested American diet!


More Articles on Nutrition and Health