How to Select Fruit*

Often the worst-looking fruits are often the best-tasting and most nutritious (taste and nutrition for natural foods go hand in hand, since the tongue is a detector of nutrients). It is important to distinguish whether the blemishes on fruit are from damage or result from optimal growing conditions and natural ripening. 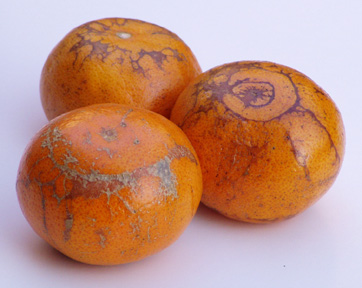 Most fruit is picked long before it naturally ripens. The hard, green fruit is less easily damaged in transit and handling and less likely to reach the supermarket in over-ripe condition. Ripening is then artificially induced by means of chemicals such as ethylene gas. Bananas, for example, are frequently picked so green that they would never ripen without chemical intervention.

When fruit is in season and locally grown, it is much more likely to have been picked at a later stage of development. A low price often means that growing conditions produced a plentiful crop. The initial part of the crop may have been harvested prematurely, but now, fruit is starting to ripen “on the vine” and must be sold soon at a lower price. If two versions of the same fruit appear similar, buy the lower-priced one.

Brown discolorations on apples, plums, nectarines, grapes, citrus fruit, tomatoes, sweet red peppers, and melons are a good sign. They indicate that the fruit has ripened naturally. A white powder on the surface of grapes, apples, plums, blueberries, cucumbers, and cabbage is most probably yeast, which is natural. It is absent from waxed fruit.

With citrus fruit, nectarines, peaches, cantaloupes, honeydew melons, mangoes, and pineapples, go by smell. The more fragrant, the better. If there are any fruit flies around, buy the fruit that they like.

Melons should be soft on each end, be leathery around the middle, and have a deep hollow sound when thumped. When you eat a ripe melon, don’t avoid the part near the skin, which is the most nutritious part and has a naturally salty taste. If you buy a watermelon that has been cut, pick the flower end rather than the stem end.

Bananas from Costa Rica seem to be the best. I like them when they are bright golden with a bit of green near the stem end. Red bananas are wonderful—not because that variety is necessarily better but probably because, as a specialty item, they are allowed to ripen on the tree longer than the yellow variety. Choose ones that are soft to the touch.

Mangoes and persimmons are ripe when very soft to the touch. It is okay to eat their skins if they are absolutely clean.