Non-action is one of the basic T’ai-Chi principles. It means accomplishing whatever task is at hand by using the minimum. Non-action maximizes efficiency and thereby raises the probability of success in any endeavor from healing to defending against a skilled attacker.

To accomplish anything meaningful, we must introduce something of ourselves, so minimizing our involvement requires utilizing elements in nature, “free of charge.”

The judicious combination of what comes from ourselves and those from nature not only conduces to non-action but is also consistent with and augments other main T’ai-Chi principles, namely, balancing and alternating yin and yang, being in the moment, continuity, and non attachment.

We will start by discussing elements that occur in nature and then those done by us. As you develop awareness of these elements, you will become able to distinguish and utilize them.

The gravitational force of the earth on an object is called its weight. The weight of an object is proportional to its mass and is directed downward, approximately toward the center of the earth. Gravity can assist or hinder movement.

An object is elastic if, after being distorted and then released, it returns to its original configuration. Our bodily tissues have elasticity and have a spring-like potential to cause movement when compressed or stretched. Most people are unaware of this subtle factor because their habitual overuse of strength masks it. But when a sufficient state of release (song) is attained, such elasticity can become an important feature in non-action.

For example, when a thigh joint rotates outward, the tissues there become stretched in front compressed in back. Releasing the energy potentially available from these compressed or stretched tissues can cause movement (shifting, turning, etc.).

Expansive strength, called nei jin in Chinese, meaning sophisticated internal strength, is a topic discussed and applied throughout my book, Tai Chi Concepts and Experiments. The main idea is that through intention, bioelectricity can cause bodily tissues to expand. Such action differs from conventional strength originating from contraction of muscles. The main advantages of expansion over contraction for T’ai-Chi use are as follows: (1) It opens the body instead of constricting it, allowing the free flow of ch’i (qi), blood, lymph, and bodily movement. (2) For martial applications, use of expansive strength tends not to alert the opponent, whereas contractive strength does so. (3) Expansive strength is also much more consistent with the principles of non-action, continuity, and being in the moment.

The following is a way to practice this movement in a manner that is consistent with the T’ai-Chi principles. Many of the elements of this movement apply to later ones.

Stand in a state of song facing north (the starting direction is arbitrarily defined so) with heels lightly touching, feet angled out comfortably (for stability), and arms simply hanging at the sides (see a in the figure below). You start in a state of Wuji, which is nothingness, before yin and yang appeared. 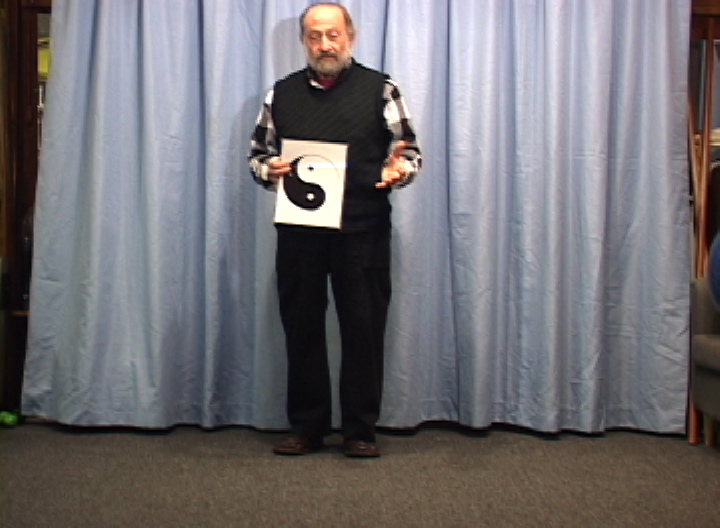 Sequence of “Preparation” of the Cheng Man-ch’ing Short Form

Next, allow gravity to lower your body and shift your weight 100% onto your right foot (see b in the figure above). As you sink into your right leg, that leg and your body become increasingly yin (yielding, earthy, downward, and inactive). It is important not to let your body “fall” and be stopped only by the stretching of your quadriceps or to regulate lowering by contracting leg muscles. Instead, your right leg should have a yang (upward, active) counterpart-an expansion that continuously regulates the lowering of the body.

As you shift and sink, allow a stretched spring in the front of your outwardly-angled right hip joint and a compressed spring in the back to release and turn your body to the right. As your left leg empties, it also turns with your body, pivoting on the ball of your left foot, thereby initiating its outward motion and its rotation to orient its centerline in the starting direction. At the same time, your arms expand and become slightly bent at the elbows, which rotate slightly forward, and your forearms rotate so that both palms face the rear.

As you sink into your right leg, your left leg must become correspondingly yang, which means that you are “activating” your bioelectricity to make it increasingly expanded, buoyant, and ready to step westward. That yang action plus the outward momentum of the turning foot ensures that when the weight on the right foot becomes 100% and friction between the foot and the floor becomes zero, the left foot already starts to become airborne. Of course, the step is not activated from the foot but involves expansion of the whole body.

When stepping to the side, all of the weight-bearing parts of the left foot should contact ground simultaneously, with no premature commitment (see c in the figure above). Also, there should be no movement of your head and body in the direction of the step until after your stepping foot contacts the floor with zero pressure. Only then should the foot blend with the floor. At some point in fine-tuning this movement, view your reflection and that of your surroundings in a mirror. Any sideways movement of your body will be sensitively revealed by a movement of the reflection of your head relative to that of the background. Note that your body will need to shift slightly in the opposite direction to that of the stepping leg in order to counterbalance its weight and leverage.

Note also that the rotational motion of the left leg evolves into translational motion, thus reducing the effort required.

When the left foot touches the ground, the centerline of that foot should lie on a north-south line. Next, allow the right thigh-joint springs to release, causing your body to shift to the left. Your weight on the left foot then shifts from zero to 100% (from yang to yin) in a continuous manner. That is, the left foot must blend with the floor with no discontinuity of movement or pressure (see d in the figure above).

As your body shifts to the left, the centerline of your body continues to point northeastward (see d in the figure above). When your body stops shifting, the linear momentum is then transformed into rotational momentum, thus causing your body to turn counterclockwise about your left hip joint, thereby rotating your right foot, which pivots on its heel until its centerline also lies on a north-south line.

Now the tissues in your right thigh joint are stretched laterally, and those of your left are compressed, causing your body to shift to a 50-50 weight distribution, with feet parallel and knees straight but loose. At this point, release as much tension as possible in both hip joints. The palms of the hands face the rear, the elbows are slightly bent, and the thumbs are outward from the centers of the sides of the thighs. Both feet should be parallel, pointing north, and shoulder width apart. Both heels should lie on an east-west line (see e in the figure above).

Being in the moment is a state in which the conscious mind observes whatever is appropriate at each moment. Directly experiencing and judiciously regulating the natural elements discussed above is much more consistent with a meditative state of being in the moment than a preconceived choreographic idea of doing movement.