Muscular contraction is initiated by nerves. These nerves can spontaneously send impulses to muscle fibers to contract when they become irritated by toxins. Cramps can also occur from an overabundance of acid elements (phosphorus, sulfur, chlorine, and nitrogen) and an insufficiency of alkaline elements (potassium, calcium, and especially magnesium). When the muscle fibers contract, they restrict the flow of blood, resulting in an increase in toxins and acid elements and an even greater insufficiency of alkaline elements. Thus, a vicious cycle begins, resulting in a cramp. The reason that such cramps are more likely to occur during sleep is that circulation is reduced, exacerbating the effect of the factors mentioned. Once the cramp has begun, movement (by walking around) and stretching help.

The following considerations should be useful in avoiding leg cramps:

Acid-Alkaline Balance. The balance of acid and alkaline elements in the body is important not only for muscles but also for the immune system and the retention of bone tissue. The ideal dietary intake involves a ratio of four times as much alkaline as acid. The alkaline elements abound in fruits and green vegetables, and the acid elements predominate in meat, eggs, white flour, white rice, beans, and peanuts, all of which contain protein (nitrogen) and have little alkaline elements. Read more about acid-alkaline balance. One part of the leg-cramp solution is definitely avoiding acid foods in the evening—especially large amounts of high-protein foods.

Micro Essential Laboratory sells Hydrion 067 test strips that are used to accurately test the acidity/alkalinity of one’s urine in the range of 5.5–8.0 pH. Such test strips are quite useful in obtaining feedback on the effects of foods on the body’s pH.

Carbonated Beverages and Intestinal Gas. Some people find that drinking carbonated beverages near bedtime can cause leg cramps. Carbon dioxide (CO2), a consituent of carbonated beverages, forms an acid, carbonic acid, in the bloodstream. Normally CO2 is eliminated by the lungs relatively quickly, but during the lowered activity of respiration and circulation during sleep, elimination of CO2 may be decreased, resulting in an acid condition causing leg cramps. Intestinal CO2 gas, formed wihin the intestines by the action of yeast on dietary sugar, can be absorbed from the intestines into the bloodstream, again causing leg cramps in a manner similar to that of carbonated beverages.

Multi-Mineral Supplements. Most multi-vitamin supplements have little or no minerals in them. Some experts recommend taking a multi-mineral supplement just before retiring for reasons having nothing to do with leg cramps, but observing this practice may reduce the occurrence of leg cramps. The list of ingredients below is from the supplement that I take. Beware of supplements that are unbalanced or are missing trace minerals. Note that unless an iron deficiency is known to exist, women past menopause and men should avoid supplements containing iron. 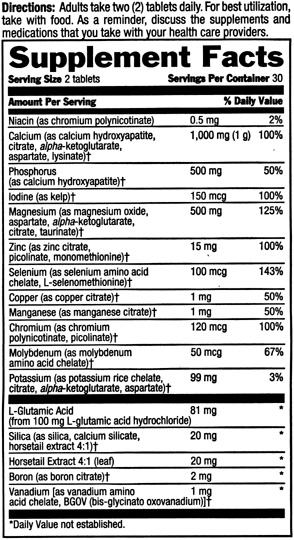 A list of ingredients typical of a multi-mineral supplement that is balanced and contains a good number of trace elements.

Magnesium Supplements. The contraction of muscles is associated with calcium, and the release of contraction is associated with magnesium. Therefore, should muscle cramps still occur despite taking a multi-mineral supplement, it makes sense to take a magnesium supplement in addition. Too much magnesium can cause loose stools or even diarrhea, so it is important to start with small amounts and work up. Magnesium citrate is commonly available in different forms (tablet, powder, liquid), with 100 or 200 mg being a good starting amount. If you have trouble swallowing large tablets, you can chew them and then drink some water.

Dehydration. Water is a main constituent of the bloodstream, which is the transport system of the body. Blood carries nutrients and oxygen to and waste products away from all parts of the body. An insufficiency of water in the blood inhibits those functions and can play a part in leg cramps (see article on water and beverages).

Temperature. I notice that, while I am asleep, the region from my hip joints down to my feet becomes somewhat cooler than the trunk of my body. I have found that simply having an extra blanket over the lower part of my body reduces the chance of a leg cramp.

Nerve inflammation. If a nerve going to the leg (or any part of the body for that matter) is activated by rubbing, pinching, or irritation by a chemical, then pain may be experienced or muscular contraction can occur in the tissues at the end of that nerve. So if a nerve going to, say a calf muscle, is thereby impinged upon at any place along the nerve, the pain or spasm will be experienced in the calf muscle. The impingement might be where the nerve exits the lumbar spine, the buttocks, or the upper leg. When the cramp occurs, it is important to note the position of the body at that time and shortly before. Twisting or bending the body a certain way or putting excess pressure on a certain point over too long a time can initiate the inflammation and, consequently, the cramp. By changing position of the body, the affected nerve is then stretched, thereby displacing the inflamed region away from the cause of its inflammation, providing fairly quick relief. So it is important to find a position for which the cramp quickly subsides. Awareness of this factor and experimentation are the key to reducing the severity and frequency. Such awareness can be an important factor should the cramp be discovered to have a positional influence.

Acting Quickly. Over the years that I suffered from leg cramps, I developed the ability to feel a cramp starting even while asleep and to immediately extend the heel of that foot. Doing so would sometimes prevent a cramp—or at least reduce its severity. Of course, addressing the causes of leg cramps makes such action unnecessary.