In 1993, Bill Moyers produced a television series, Healing and the Mind. In the episode, The Mystery of Chi, which was filmed on location in Beijing and Shanghai and which featured David Eisenberg, M.D., of Harvard Medical School, Moyers interviewed an old T’ai-Chi master. The master said that it took him ten years to experience ch’i and another ten years to learn how to use it. Even allowing for this master’s typical Chinese modesty, I was surprised by his comment because my students experience ch’i early on in their training. Since that time, I have come to realize that only a minority of those who study T’ai Chi view it as encompassing Ch’i Kung. Read a biological interpretation of ch’i.

To my knowledge, not many T’ai-Chi teachers combine Ch’i Kung with T’ai Chi even though these two disciplines are inextricably connected; namely, T’ai Chi involves martial-arts movements done as Ch’i Kung. Each T’ai-Chi movement involves rotations of the arms and changes in their shape from convex to concave and back, which gently stretch and massage acupuncture meridians. The circular movements produce centrifugal effects, which dislodge tensions and create changes in hydraulic pressure. When the circular movements occur in a vertical plane, the effect of gravity adds to these pressure changes, and the forward and backward shifting adds more pressure changes. The turning of the body about a fixed leg opens and closes the thigh joints, thereby compressing and stretching the tissues and acupuncture meridians involved. Moreover, the regular and deep breathing typical of T’ai-Chi movement oxygenates the tissues, which enhances the flow of ch’i.

Traditional methods of teaching martial arts involve metering out essential ingredients very slowly. Such teacher reticence was based on making sure that the student would not use the teacher’s knowledge against him/her or leave prematurely and, by manifesting incomplete martial skill, damage the teacher’s reputation. Such secrecy was appropriate hundreds of years ago but not today—especially because the healing aspects of T’ai Chi are not for causing harm. Unfortunately, the tradition of withholding knowledge has been passed down, and today, there are few knowledgeable teachers who are willing to teach freely. Of course, some teachers are highly skilled and want to pass on their knowledge but do not have the ability to transmit it.

One problem in experiencing ch’i is that of recognition (as for many aspects of T’ai Chi). All of us have had ch’i circulating through our bodies since before birth, so those who have not yet recognized ch’i are like the fish who says, “Water? What’s water?” Ch’i is not the only bodily phenomenon that one can go a lifetime without noticing. For example, it was a long time before it was recognized that the blood circulates even though now, that knowledge is second nature. Another difficulty in experiencing ch’i is that, in non-Asian cultures, there is no word for ch’i. One way of saying “hello” in China is to ask, “How is your ch’i?” That the concept of ch’i is part of the Asian cultural conceptual framework does not mean that all Asians recognize ch’i, but it does tend to make them more open-minded about the possibility of its existence. Certainly, it is harder to experience something that is foreign and for which there is no name.

A Two-Person Exercise for Recognizing Ch’i

When two people combine their ch’i, it adds, and its intensity can then be high enough to be noticed. In the following exercise (shown in the figure below), two people pair off, facing each other. One partner extends his/her hands with palms facing upward, and the other partner extends his/her hands with palms facing downward. After a short time one or both partners will start to experience a tingling and squirming feeling in the palms of their hands. Small experiments can be made such as increasing and decreasing the separation of the hands or altering the distance of the elbows from the body. Each change is usually accompanied by an increase or decrease in the sensation. After a while, the partners reverse roles. This exercise usually results in most participants experiencing ch’i. Once ch’i is felt, sensitivity to it continually increases with practice of Ch’i Kung and T’ai Chi. 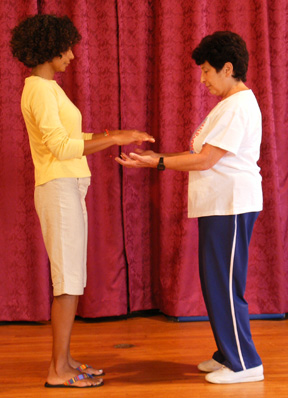