The painting below, “Dressing for the Carnival,” by Winslow Homer (1836–1910), depicts former American slaves preparing for a carnival (see http://www.metmuseum.org/toah/works-of-art/22.220). Homer was very interested in painting former slaves and was at that time criticized for doing so. In this painting, it appears that one woman is in the T’ai-Chi posture, “Single Whip” (compare with the photo below that of the painting). Is it possible that former slaves knew T’ai Chi then?

A Winslow Homer painting of former American slaves preparing for a carnival (1877). 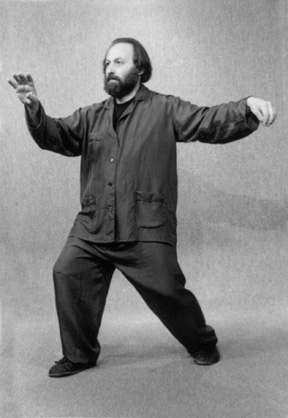 Robert Chuckrow in “Single Whip” Posture (mirror image of a photo in his The Tai Chi Book, p. 190).

Actually, this painting is not evidence for former slaves knowing T’ai Chi. The woman in this painting who looks as though she is doing T’ai Chi is actually sewing the clothing of the man who has his back to her, and in the original painting, the thread going to her left hand is quite visible. So why does she appear to be in the mirror image of the “Single Whip” posture? Here is my guess: At that time (in the 1850s and 60s), there were thousands of Chinese immigrants who were working on the railroad. It is possible that Homer saw some of them doing T’ai Chi and was fascinated by postures such as “Single Whip.” Many artists sketch different scenes and then assemble them into a single painting, as appropriate. For example, the gate on the left side of the fence may have been sketched from a gate at a different location and then added to the painting for balance (note how the diagonal wooden support on the gate leads the eye down from the shoulders of the leftmost woman to the child on the left, and the child’s hands and shadow and the other diagonal support lead the eye back to to the main group).

I have pretended to hold a needle and thread as if I were sewing at the same height as that of the woman in the painting. I find that the angles of her wrists are very awkward for sewing. This fact is further evidence that Homer did not paint the woman as she actually was but in a posture he had seen beforehand and liked.