The Mind During T’ai-Chi Practice

Once the basic movements of the form become fluid, there are many possible states of mind during practice. One state is doing the form without conscious thought while the mind consciously reviews the day's events. Another state is , so perhaps it is an oversimplification to divide thought into conscious and subconscious. Nevertheless such a distinction will provide much value in the following discussion.

Two students pair off in a harmonious stance. One student (A) assumes the posture “Ward Off,” and the other student (B) assumes “Push,” as shown below: 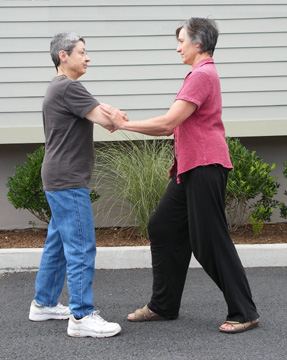 Two students attempting to recognize the difference between jin and li.

Student A determines the amount of force to exert on the B’s hands and only presents resistance to whatever force A decides to exert. A must first relax as completely as possible and then slowly build up force against B’s hands. If A uses li (muscular contraction) to exert force, B will feel a rigidity, and if A uses jin, B will feel a spring-like resistance. If A uses li, and B then suddenly lets up her resistance, A will tend to fall forward. However, if A uses jin, then if B suddenly lets up her resistance, A will be stable, but only her arm may move forward. This way, both students get to experience the difference between the two types of strength, and after swapping roles several times, the difference should be clear. Of course, if a practitioner who already can manifest jin is present, that person should work with each student in the above manner.

Read about practicing jin within the T’ai-Chi Form.