T’ai-Chi practitioners tend to differ on how much strength should be used when doing the solo form. Some practitioners strive to be super-relaxed, and others believe in using force against an imagined opponent. For a long time, I tried to resolve what seemed to be a T’ai-Chi contradiction: On one hand, I knew that doing the T’ai-Chi form is supposed to involve no strength beyond the minimum. On the other hand, I knew that one of the purposes of T’ai-Chi practice is to develop strength. As a senior classmate of mine, Stanley Israel (1941–1999), convincingly put it, “T’ai-Chi Ch’uan is a martial art. How can there be a martial art that does not involve strength?” The three quotes below embody the seeming contradiction between no strength and strength:

(1) The following is from the T’ai-Chi Classics:

“A feather cannot be added; nor can a fly alight.”1

This statement is sometimes taken to mean that the body should be so delicately balanced and free-moving that the weight of a feather will be felt and that a fly alighting will set the whole body into motion.

“Someone who has extremely good T’ai Chi Ch’uan kung fu has arms like iron wrapped with cotton and the weight is very heavy.”2

“Man lives on land. His long familiarity with air often makes him forget about its existence. Since it lacks solidity and shape, it eludes attention or easy mental grasp by the beginner. To liken air to water aids the imagination. It is like water in the sense that if one pretends to swim while out of water, his movements automatically conform to the principles of T’ai Chi. By this practice, the novice will ultimately “feel” the air to be heavy in the sense that he feels water to be heavy. At this stage his body has become lighter and more pliable than that of the average man. This feeling of buoyancy and suppleness derives from firmly rooting the feet and using the body in “dry swimming.” Functionally, this slow movement against an imagined resistance will ultimately create great speed in responding to a fighting situation.”3

Prof. Cheng considered “swimming in air” to be so important that he devoted a whole chapter to it in his Thirteen Treatises.4 In that chapter, Prof. Cheng says:

“As you make progress the air will not only feel heavier than water, it will feel like iron.”5

On one hand, the body must be so free of tension that the slightest touch will cause the body to move. On the other hand, the body must be able to manifest strength—even while doing the T’ai-Chi form! These two ideas seem contradictory because if any muscular action occurs in the absence of an actual external resistance, then there must be a corresponding internal counter resistance. But that would involve pitting one muscle group against another, which would prevent the body from moving freely (and would also be against the principle of non-action). Here is my attempt to reconcile the above enigma:

It is known that the mere thought of doing a physical action is accompanied by minute nerve impulses sent to exactly the muscles that would be involved in that action. These nerve impulses are so weak that the muscles in question do not respond—or respond so weakly that there is no noticeable outer movement. Said alternatively, the nerve impulses are below the threshold for producing external muscular action. But if these impulses were strong enough, the muscular response would be that of doing exactly the physical action in mind. Note that Prof. Cheng used the words imagination, pretends, and imagined and at no point talked about using actual strength.

Consider next, another statement from the Classics in light of the above paragraph:

Here is another translation of the above statement:

“The chin [jin] (internal strength) is sung [sung] (relaxed), but not sung; it will extend, but it is not extended.”7

It does not take much of a stretch to interpret Wu Yu-hsiang’s meaning to be that the mind is creating implied action of the body.

Untrained people usually use li for exerting strength in voluntary physical actions, so their thoughts of doing a physical action are accompanied by nerve impulses corresponding to muscular actions involving li, not jin. But if a T’ai-Chi practitioner who is adept in the use of jin thinks of doing an action involving jin, then the resulting nerve impulses will correspond to muscular actions involving jin, not li.

In order to add the dimension of jin activation while doing T’ai-Chi movements, the practitioner must first practice the form for a period of time in as relaxed a manner as possible. Of course, when you do the form, some muscular action is required, but the basic idea is that an empty cup holds the most, so to learn an unfamiliar type of muscular action (jin), it is first necessary to use minimum strength for a sufficient length of time. Finally, it is of value to practice push-hands using jin, not li. Whether or not you have a partner with whom to practice push-hands, you should practice jin while doing the form in the manner discussed next.

Each movement of the T’ai-Chi form corresponds to one or more possible self-defense applications. Even if you are not studying T’ai Chi as a martial art (quan), knowledge of some of the self-defense applications is of value. If a practitioner who is adept at using jin imagines doing each application of each movement while doing the form (or simply imagines moving against a slight resistance), then, doing the movements of the form that way exercises the processing, sending, and receiving of neural impulses corresponding to jin. Thus, you can cultivate jin by doing the solo form by using minimum muscular exertion and activating additional neural impulses corresponding to moving against a resistance. Practicing this way is important because you can cultivate jin on your own terms, at your own rate. Practicing with a partner is also essential, but in doing push-hands there is a tendency to become competitive and revert to using li.

Achieving such a feeling of resistance cannot involve any actual muscular strength, which, as we said earlier, would require pitting one part of the body against another. Thus, the intensity of the neural impulses involved here must always be below the threshold of muscular exertion. Increasing the exertiion of actual physical strength involves increasing the number of nerve impulses to a muscle. Therefore, the increase in “heaviness” of the air that Prof. Cheng talked about must be achieved by increasing the number of nerve impulses that are so activated, thus leading to the perception of increased heaviness.

Even the concept of suspending the crown may be along similar lines. Please note the use of the word effortlessly in the following quote:

Another dimension of practice is expressed as follows:

“ The upright body should be stable, and comfortable to be able to support (force from) the eight directions.”9

Literally, “the eight directions” are the four cardinal and four intercardinal directions in the horizontal plane. However, by extension, “the eight directions” can be interpreted to mean every possible direction in three dimensions. Thus, in terms of the above discussion concerning imagined resistance, “controlling the eight directions” can be interpreted that, in doing T’ai-Chi movement, jin should be manifested in every direction as you move. That is, every outer surface of your body and limbs should exhibit implied strength through imagined jin. Also, to balance yin and yang, there should be implied backward jin when moving forward, and there should be an implied outward jin while bringing arms inward (to absorb an opponent’s force without collapsing).

“Up or down, front or back, left or right, are all the same.
These are all i (mind) and not external.
If there is up, there is down; if there is forward, then there is backward; if there is left, then there is right.”
If the i wants to move up, it contains at the same time the downward idea.”10

Please note the sentence, “These are all i (mind) and not external,” and the use of the word idea.

1) Here is an example of the use of imagined jin in the T’ai-Chi form along the lines that I was taught by Cheng Man-ch’ing and Harvey I. Sober: When doing the “Beginning” posture, as your hands descend, imagine them falling through water, with its characteristic resistance to motion. After the hands have descended, the palms face the rear, and the shoulders and arms have a rounded shape. Next imagine the water rushing from behind you, pushing your hands and arms forward. At the end of that posture, without actually tensing anything, imagine that you need to push your hands and arms backward to prevent the water from pushing them forward. When the same stance reoccurs at the very end of the form, it is good to remain there in a meditative state while “feeling” the water pushing your hands forward. 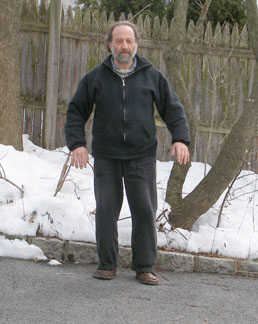 Robert Chuckrow standing in “Beginning” posture, imagining water pushing his hands and arms from behind.

(2) When doing the movements of the solo form, imagine a rising limb to be very heavy, but be careful to make this perception occur without tensing anything.

(3) Each movement of the solo form involves alternating rotations of the wrists. Imagine that there is a resistance to these alternations beyond that of the natural elasticity of the tissues of your forearms.

I think that you will find each of the above exercises very stimulating to the sensation of ch’i in the hands and arms. A possible reason for this additional benefit is explored next.

Practicing T’ai Chi or Ch’i Kung involves doing natural movement while releasing excess tension in every part of the body. It is thought that this release enables ch’i to flow more freely and with greater intensity. Even those who are not adept at concentrating ch’i can still gain the benefits of increased ch’i from doing T’ai Chi or Ch’i Kung. In fact, you need not even recognize the sensation of ch’i to receive its benefits. Read about how to recognize ch’i.

For those who are adept at concentrating ch’i and in sending it to a particular area of their bodies or to another person, something occurs beyond just relaxing and doing natural movement—both mind and body must be actively involved. Thus, when you concentrate ch’i, it is likely that, among other things, your brain is sending neural (electrical) impulses to the tissues involved. These electrical impulses are not sufficiently intense to cause your muscle fibers to contract but may well cause excitation on a cellular level. The resulting tingling sensation, perceived as faint electrical stimulation, may well result from the neural excitation of the cells and their consequent increase in the specific cellular activity discussed next.

In The Tai Chi Book,11 I wrote about Elaine Summers’ idea that ch’i may involve protoplasmic streaming, which is the movement of the fluid substance (cytoplasm) within a plant or animal cell. Such streaming facilitates the exchange of cellular waste products for oxygen and nutrients. Interestingly, single-celled life forms locomote by means of changes in cellular shape resulting from protoplasmic streaming. I also wrote that glands and organs may intercommunicate and balance their functions through wave motion produced by synchronous changes in shape of groups of cells. These proposed activities account for some of the benefits attributed to ch’i and may be enhanced through conscious neural stimulation of cells.

Thus, if (a) moving against an imagined resistance involves sending neural impulses that stimulate protoplasmic streaming and (b) ch’i is related to protoplasmic streaming, then “swimming in air” can increase ch’i and its resulting benefits. My experience certainly bears out this conclusion. Read a biological interpretation of ch’i.

It should be recognized that the images of using strength against an external resistance described in this article are just teaching devices. They should be “put in your back pocket” once the skills learned from them become second nature.


More Articles on and Information About T’ai-Chi